Ordinance Establishing TGSCC-SBD
The Tower Grove South Concerned Citizens Special Business District (TGSCC-SBD) was formed by St. Louis City Ordinance Ordinance 63154, pursuant to Sections 71.790 through 71.808, RSMo. Pursuant to Section 71.800, RSMo., Special Business Districts “may impose a tax upon the owners of real property within the district which shall not exceed $0.68 s on every one hundred- dollars of assessed value of property. 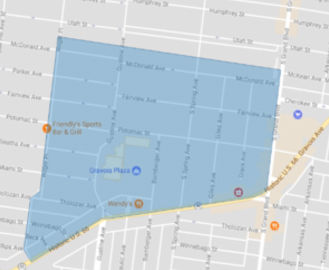 Beginning at the intersection of the center lines of Grand Boulevard and the McDonald Avenue and Utah Place east-west alleyway;

Northwardly along the boulevard to the point of its beginning.

The Board of Commissioners shall consist of seven (7) members, and shall be appointed by the Mayor with the advice and consent of the Board of Alders

No employee or elected official of the City shall be a member of the Board of Commissioners.

Each member of the Board of Commissioners shall serve for a four (4) year term, with terms expiring as of December 31st of the designated year or when their successors are appointed as provided herein, whichever is later.

Applying to the Board

Current Board of Directors

Property Tax Collection
Taxes for the District shall be assessed and collected as follows:

A.  For the purpose of paying for costs and expenses incurred in the establishment and operation of the District, the provision of services and facilities and improvements authorized in Sections Five and Six of this ordinance, and incidental to the leasing, construction, acquisition and maintenance of any improvements authorized herein or for paying principal and interest on bonds or notes authorized for the construction or acquisition of any said improvement, there may be imposed a tax upon all real property within the District which shall not exceed eighty-five cents ($.85) on the one hundred dollars ($100.00) assessed valuation, subject to the provisions of Section Nine.

B. If the proposition submitted to the qualified voters residing in the District receives in its favor the votes of the majority of the qualified voters voting at the election conducted pursuant to Section Nine, the initial rate of levy which shall be imposed upon real property within the District shall be eighty-five cents ($0.85) on the one hundred dollars ($100.00) assessed valuation.

C. Real property subject to partial tax abatement under the provisions of Chapter 353, R.S.Mo., shall, for the purpose of assessment and collection of ad valorem real estate taxes levied under the District, be assessed and ad valorem real estate taxes shall be collected upon the same assessed value on which its ad valorem real estate taxes and payment in lieu of taxes are based in the Ordinance adopted by the City of St. Louis approving the development plan of any such corporation and authorizing tax abatement; provided, however, that the owners at such real property are strongly encouraged to make additional equitable, annual donations to the District in lieu of the additional District taxes

D. The levy shall not be imposed upon real property exempt from ad valorem real estate taxes because of charitable, religious, educational or other public or private uses; provided, however, that the owners of such real property are strongly encouraged to make equitable, annual donations to the District in lieu of District taxes.

E. The tax provided for by this ordinance shall be collected by the Collector of Revenue and held in a special account to be used only for all purposes authorized hereunder, as provided by law.

F. If the District for any reason is dissolved, all delinquent taxes collected after the date of dissolution shall be credited and forwarded to the general fund of the City of St. Louis after all debts of the District, if any, are discharged.

The following is an example formula for the Tower Grove South Concerned Citizens Special Business tax rate.  Property values are based on appraisals from the City of St. Louis Assessors Office.